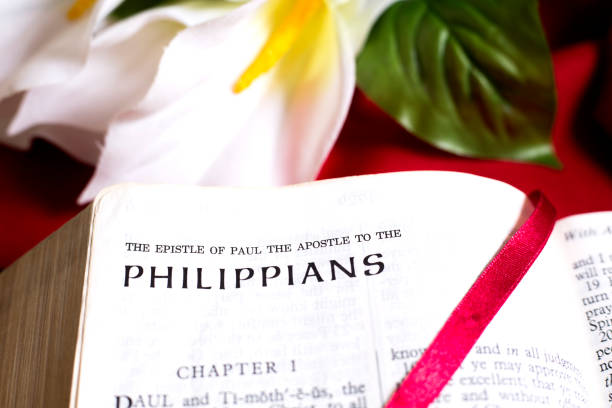 This was the first of a four week sermon series on Philippians. Unfortunately this sermon was not recorded, but you can read Caroline's sermon notes.

The city of Philippi, in northern Greece, was named after King Philip II of Macedon / Macedonia –  he was the father of Alexander the Great.

It was a prosperous Roman colony-  the citizens of Philippi were also  ]citizens of Rome – remember in our sermon series on Acts - the owners of the girl who earned them a lot  of money, because she had a spirit which  enabled her to be  a fortune teller  - she  followed Paul and Silas and they healed her of this spirit possession which angered her owners who went on to report to the authorities saying that Paul and Silas were guilty of behaving unlawfully in the eyes of Roman practices

The Philippians often spoke Latin and dressed like Romans ... many of them were retired military men who had been given land and served as a military presence in this frontier city

May explain why there weren’t enough Jews to permit the establishment of a synagogue within the city – remember Paul and Silas went outside the walls to the periphery to find believers to talk with, and they met the group of women including Lydia

This also explains why Paul doesn’t refer to the OT in his letter, because there would be few people who would recognise and understand any reference to OT passages

The main purpose of the letter was to thank the Philippians for the gift they had sent to him when they knew of his imprisonment     1:3-5 And  they had given more than once  ref 4:16

There are 5 aspects that Paul mentions throughout the letter ...

As I mentioned earlier, we have previously read in Luke’s account in Acts 16,  that Paul and Silas had  travelled to Philippi, a Roman colony and a leading city of that district – it was an important social and commercial centre -  there’d be a lot of people travelling thru’ – providing more opportunities to share about their faith

Philippi, being a Roman colony, would not be happy for unrecognised religions to meet to worship, so any followers of Jesus who had travelled out as far as there, would go to the periphery of the city to meet and pray together, probably to avoid confrontation and further persecution

Word ‘joy’ in various forms used 16 times throughout the letter

That’s a lot of joy from someone in prison !

‘being confident of this, that he who began a good work in you will carry it on to completion until the day of Christ Jesus.’

Just as the citizens of Philippi are proud and secure in their status as Roman citizens, so Paul refers to our status as citizens of God’s heavenly kingdom which we’ll read more of when we look at ch 3

9 And this is my prayer: that your love may abound more and more in knowledge and depth of insight, 10 so that you may be able to discern what is best and may be pure and blameless for the day of Christ, 11 filled with the fruit of righteousness that comes through Jesus Christ—to the glory and praise of God.

A powerful prayer that we can pray for one another

Now I want you to know, brothers and sisters, that what has happened to me has actually served to advance the gospel. 13 As a result, it has become clear throughout the whole palace guard and to everyone else that I am in chains for Christ

The guards and the community around where Paul is, are all aware of why he is imprisoned and the news of Jesus, what happened to Him and why Paul and others follow Him, is being talked in all sorts of places

In vs 15- Paul does mention  without much detail really, about those who preach out of envy and rivalry ..... but Paul says that the important thing is that Jesus is being discussed and God will use this even if the motives of those ‘preaching’ aren’t very good... maybe just those who are ‘gossiping’ what they’ve heard...

For to me, to live is Christ and to die is gain. 22 If I am to go on living in the body, this will mean fruitful labour for me. Yet what shall I choose? I do not know! 23 I am torn between the two: I desire to depart and be with Christ, which is better by far; 24 but it is more necessary for you that I remain in the body. 25 Convinced of this, I know that I will remain, and I will continue with all of you for your progress and joy in the faith

Paul is in a dilemma because really he would just like to be right now in the personal presence of Jesus  and have the privilege and 100% joy of seeing Jesus face to face, but he is also happy to live in the service of His Lord and Saviour, doing what he can to let others know about Jesus and helping believers  to grow in their faith

The chapter closes with Paul being clear that all believers are to expect opposition of some form or another but to not be frightened but to stand firm ... next week we will read more about Jesus’ obedience to His Father and His example to us.