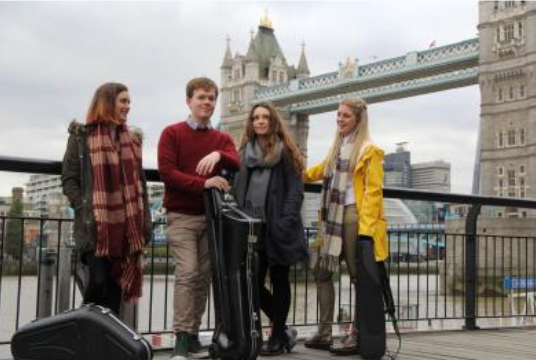 We look forward to hearing Carnelian Saxophone Quartet’s concert on Saturday at 12:30. They will be playing:

The Carnelian Saxophone Quartet are an innovative and dynamic ensemble based in Manchester, UK.
With new and exciting projects frequently arising, Carnelian have already amassed an impressive
resume.
The quartet have performed at a number of venues across the country. The New Music North West
Festival, the Annual ABRSM conference held in London and the Uppermill Music Festival are just a
few of the quartet’s exciting performance experiences. Carnelian have also had the privilege of
performing a recital at the Manchester Cathedral in November 2016, a folk-inspired ‘spotlight’ concert
at the RNCM in February 2017 and a recital at the 2017 European saxophone congress in Portugal in
July.
The quartet is currently very excited to be working towards a number of significant performances
including a week at the European Chamber Music Academy in The Hague as well as two concerts
performing 6 brand new commissions for the quartet, one at the RNCM and one in Birmingham.
The ensemble are also frequently coached by various world class musicians, including Julian Bliss, Rob
Buckland and the Artvark Saxophone Quartet.
The Carnelian Saxophone Quartet