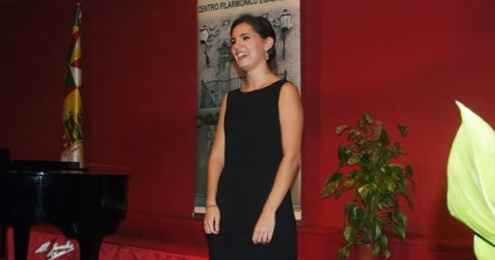 Irene Jimenez Lizcano and (Flute) Hector Leung  (Piano) are perfoemiing their WACIDOM lunchtime concert on Saturday 27th January. They will be playing:-

Irene started playing the flute when she was 8 and she studied at the Córdoba High Conservatory (Spain), obtaining the Extraordinary Prize in her Bachelors Diploma and winning first prize of the ‘Youth Musicians Competition’ in 2016.

She has a wealth of orchestral experience such as being a member of the Andalusian Youth Orchestra (OJA), as well as playing in some professional orchestras from Spain – the Córdoba Orchestra (OC) and the Symphonic Orchestra of Granada (OCG).

Currently she is studying in her second year of a ‘Master of Music in Performance’ degree at the RNCM, under the tutorship of professors Laura Jellicoe, Katherine Baker and Kevin Gowland. Leverhulme Arts and Pat Barney Award are supporting her studies at the Royal Northern College of Music.

Hector Leung completed his Masters degree at the RNCM in 2017, majoring in piano performance with his principal tutors Colin Stone and Dina Parakhina. He has obtained distinctions for all academic and performance modules at the RNCM and has been awarded the Fellowship of the Royal Schools of Music with a high distinction by the Associated Board of the Royal Schools of Music.

A dedicated artist, Hector frequently collaborates with various instrumentalists and vocalists to deliver wide-ranging classical and modern repertoires. He was one of the Songsters pianists for the RNCM School of Vocal Studies for two years, having won two accompanist prizes in 2015 at the RNCM Alexander Young Competition and the Bessie Cronshaw/Frost Brownson Song Cycle Competition. Within his other achievements are the first prizes at the Hong Kong International Pianist Association Piano Competition, and the Hong Kong Youth Piano Competition in 2013.

In July 2017, Hector made his own live piano sonata improvisation at the RNCM Student Festival, in the style of late Prokofiev. He has also made his public debut performance at the Wigmore Hall in May 2017 with RNCM oboist George Strickland, performing a duo piece by British composer Tansy Davies.