Juliette Kowalski and Jason Lam will be playing a concert on Saturday 30 September 2017. They 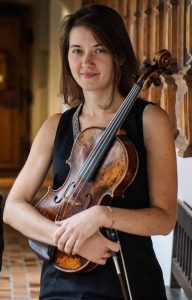 Glinka: Sonata for Viola and Piano in D minor

Bridge: 2 pieces for Viola and Piano

Brahms: Sonata for Viola and Piano in F minor

Until she was 18, she studied in France in her native region, Franche-Comté, where she performed with local professional ensembles such as Orchestre Victor-Hugo and Ensemble Tetraktys, as well as performing chamber music repertory.  In 2009 she moved to Lausanne, Switzerland, and entered Frédéric Kirch’s class at the Haute École de Musique, where she obtained her Bachelor and Master degrees. While studying in Lausanne, she worked with several professional ensembles.  Her passion for chamber music led her to create the Appassionato Quartet, tutored by the Debussy Quartet for a year, with which she performed over three years.

She also joined the French Youth Orchestra  for 3 years and the Joven Orquesta Nacional De España in 2010.

She had her first pedagogic experience in Palestine where she taught children and teenagers during a summer course organised by the Edward Saïd National Conservatory of Music in collaboration with Nigel Kennedy.  In 2012 she performed with the Palestine String Orchestra and Nigel Kennedy at the Jerusalem Festival.

She moved from Lausanne to continue her studies at the RNCM, where she completed a Master Degree in 2017, and won the 2017 RNCM Rachel Godlee Viola prize.  Besides performing at several events organised by the RNCM, she joined the Mahler Chamber Orchestra academy with Daniel Harding in 2016, and she has been invited to play at the Mendelssohn on Mull festival.  She regularly returns to Switzerland to perform with the Young Eurasian Soloist String Orchestra, with which she performed in Zurich, Bern, Almaty (Kazakhstan) and at the Sion Festival.

Born in Hong Kong in 1995, Jason began learning piano at the age of 7. He then connued his secondary school
and piano studies in the UK in 2009, where he was a student of Ma$hew Davies and took part in masterclasses
with Margaret Fingerhut. During this period, he achieved a Disncon in his Grade 8 ABRSM exam, passed the
DipABRSM, and performed Haydn’s Piano Concerto in D Major in a local church. Jason is now a licenate of the
Royal Schools of Music.
Since 2014 Jason has been studying piano performance at the RNCM under Colin Stone, and currently Paul
Janes. He recently took part in masterclasses with renowned pianists Marn Roscoe and Stephen Hough, playing
Liebermann’s Piano Concerto No 1 and Ravel’s Toccata from Le tombeau de Couperin. Jason has performed
numerous mes in the RNCM Concert Hall both as a soloist and part of an ensemble, and has given recitals
around Manchester, Southport and Leeds.
Jason is also an enthusiasc chamber musician, having performed Piazzolla’s Estaciones Portenas on mulple
occasions, and has had lessons with Ma$hew Hunt, The Moscow Rachmaninov Trio, Henk Gui$art, and the
Notos Quartet, playing repertoire such as Mozart’s Piano Quartet in G minor, Brahms’ Piano Quartet in G minor
and Tchaikovsky’s Piano Trio in A mino
Juliette Kowalski (viola) and Jason Lam (piano) WACIDOM Lunchtime Concert
This site uses cookies More info