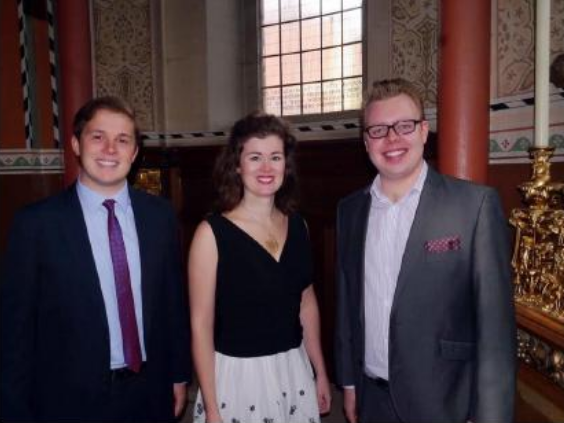 Join three graduates of the RNCM for a lunch time recital of European Opera, Operetta and Oratorio.

Whether an opera lover or completely new to this genre this event promises to be accessible and enjoyable for all!

Charlotte Richardson is currently studying at the RNCM, where she recently won the Dame Eva Turner Prize for potential dramatic sopranos.  Previously, Charlotte studied at Trinity Laban Conservatoire and held a choral scholarship to King’s College London. On her gap year she was a Guinness choral scholar at Christchurch Cathedral, Dublin. Between 2007 and 2012 she toured worldwide as soprano soloist with Riverdance choir Anúna.

Edward Robinson is a baritone, based in the North West, currently studying for his Master of Music postgraduate degree. He is under the tutorship of the internationally acclaimed baritone, Quentin Hayes.

Daniel McLaughlin Recently completed his MMus studies at the RNCM, Daniel is a pianist and trombonist. He gained an LTCL diploma in Piano Performance at the age of 16, under the tuition of his Grandfather. He has accompanied recitals and competitions at the RNCM, and at Huddersfield University, where he gained a first class BMus (Hons) degree. Daniel has also accompanied soloists in the BBC Young Musician competition, and for competitors in the Kirklees Young Musician award. As a trombonist, Daniel currently plays for the world famous Grimethorpe Colliery Band. In 2016, he gained a DipABRSM diploma in trombone performance, and after receiving initial tuition from his Grandfather, has since been under the guidance of Richard Brown and, more recently, Jonathan Beatty.

Whistle-Stop Opera – An exploration of Europe