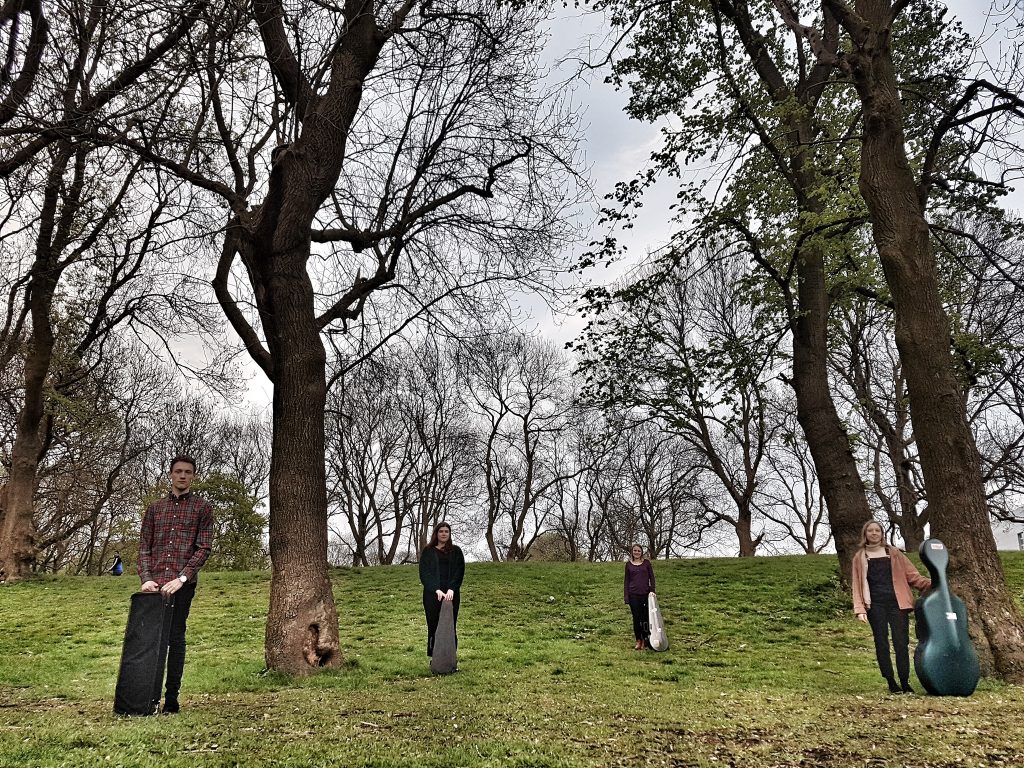 The Anella Quartet is a young and enthusiastic ensemble who have recently graduated from the Royal Northern College of Music. They were mentored there by distinguished musicians including Donald Grant and Pavel Fischer. All four members of the quartet enjoy performing with professional orchestras such as the BBC Philharmonic, the Royal Liverpool Philharmonic and Manchester Camerata. The quartet
were the joint winners of the 2018 RNCM Weil Prize in March, the winners of the 2018 Hirsch Prize in November and the RNCM Nossek Prize in January 2019. They were also selected to perform in the 2018 Christopher Rowland RNCM Chamber Ensemble of the Year Prize.

William started playing the violin at the age of 8 through his local music service in Solihull. He then went on to join Birmingham’s Junior Conservatoire at the age of 16 and following two years spent there, he studied at the Royal Northern College of Music, graduating with a first class honours degree in 2017. He has recently completed a Masters degree, at the college where he graduated with a distinction. He learnt with Pavel Fischer, James Clark and Levon Chilingirian. As a keen chamber musician, William has won college prizes including the Hirsch, Weil and Nossek prizes with the Anella String Quartet, who are increasingly performing recitals in the UK.

Cleo is a violinist who has just finished studying at the Royal Northern College of Music, where she studied with Yossi Zivoni. She began playing the violin at the age of 7 and was a student at NMPAT until 2015, leading the County Youth Orchestra in her ?nal  year. She was a member of the National Youth Orchestra of Great Britain for two years. During her time at the RNCM, she has performed in many of the college’s ensembles and has also represented the college abroad in Paris and Montepulciano, Italy where she lead the orchestra. In September 2018, she appeared as a soloist with the Hallé, alongside two other students from the RNCM in a ‘set-works’ concert for GCSE students. Cleo was awarded a place on the ‘Professional Experience Scheme’ with the Royal Liverpool Philharmonic Orchestra in September 2017 and the BBC Philharmonic in 2018.

Rebecca started playing the Viola at the age of 9. She is currently a Masters student at the Royal Northern College of Music (RNCM), where she studies with Lucy Nolan and Veit Hertenstein. She is a member of the Anella Quartet who were the recent joint winners of the 2018 RNCM Weil Prize, Hirsch Prize and 2019 Nossek Prize. They perform recitals around the North of England and were selected to play at the Christopher Rowland Chamber Music Prize. Rebecca is an experienced orchestral player. She has performed with Manchester Camerata and is currently on the Professional Experience Scheme with the BBC Philharmonic. Rebecca was previously a member of the National Youth Orchestra.

Ellie grew up in Cornwall, learning the cello and piano locally until the age of 16 when she gained a place at Chethams School of Music in Manchester. She went on to study at the Royal Northern College of Music from which she has recently graduated with a Bachelors and a Masters degree in performance. Her studies were guided by the tutelage of Gillian Thoday, Victoria Simonsen, Anna Menzies and Nicholas Trygstad. Ellie has performed in masterclasses with internationally renowned cellists such as Miklos Perenyi, Steven Doane, Hannah Roberts and Karine Georgian. In 2017, she took on the roles of soloist and director in a performance of Haydn’s Cello Concerto in D with the Liskeard Chamber Players. She has a wealth of orchestral experience and, during her studies, she performed as principal cellist for many of the orchestras at RNCM, including their annual tour to Montepulciano, Italy. In her ?nal year at the RNCM she gained a place onto the Professional Experience Scheme with the BBC Philharmonic and now works with the orchestra as an extra player. Ellie is a passionate chamber musician and is excited to be working with the prize-winning Anella Quartet. She has a diverse range of musical interests and frequently collaborates with artists such as singer-songwriter Anna Mcluckie.
Anella Quartet WACIDOM Saturday Lunchtine Concert