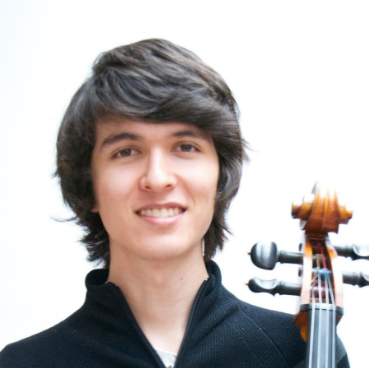 This Saturday we look forward to a concert by Yuuki Bouterey-Ishido (Cello), and  Tianyang Han(Piano). They will be playing:
Robert Schumann – Adagio and allegro Op.70
György Ligeti – Sonata for solo cello
Johannes Brahms – Sonata for cello and piano No.2 in F, Op.99 (4 mvts)

Having graduated from the International Menuhin Music Academy in 2015, Yuuki Bouterey-Ishido currently studies at the RNCM with cellist Hannah Roberts. Yuuki has been invited to perform at major festivals including the Schnittke Festival in London and the Semaine Internationale de Piano et de musique de chambre in Switzerland. Other significant performances include solo recitals in Japan, Italy and New Zealand. He also toured Europe extensively over three years as a member of the Menuhin Academy Soloists under the direction of Maxim Vengerov. Yuuki is also a passionate chamber musician and has won many prizes with different chamber groups, as well as being invited to perform in chamber festivals in Switzerland and Romania. He currently performs regularly as a member of the Valette Piano Trio in and around Manchester. Major prizes include the String Player Award at the Gisborne International Music Competition 2017, Finalist in the Barbirolli Cello Prize in Manchester and 2nd Prize in the National Concerto Competition in New Zealand.

Born in 1995, Tianyang started to learn the piano at the age of 5. At 14 she was inspired to pursue a career as a professional musician after hearing the famous Chinese pianist Yundi Li perform. She entered the Shenyang Conservatory of Music in 2009. During this period
Tianyang achieved outstanding results in The 16th Hong Kong-Asia Piano Open Competition, winning the Second Class Award in the Youth Class and the Fourth Prize Award in the Chopin Ballade or Scherzo Class. She also received the Third Prize in the Shenyang
Conservatory of Music Competition in 2011 and 2013. She attended the Italian Music Fest, Perugia, in 2010 and 2012, where she performed the Mendelssohn Piano Concerto No.1 with Sergei Babayan conducting. In 2014, Tianyang started her studies at the RNCM with Graham Scott – the Head of Keyboard, receiving the prestigious Lord Rhodes Scholarship to support her study. In 2018, she received scholarship and travel fund to join the 29th Semaine International de Piano & Musique de chambre festival.
Other than solo performance, Tianyang has also been playing regularly with her piano trio – Valette trio. The Valette piano trio won the Hirsch Prize, Nossek Prize and Weil Prize within two years, and was the only group to present RNCM in the 2018 Intercollegiate Piano Trio Competition. The piano trio has been performing in various venues in England.
Yuuki Bouterey-Ishido and Tianyang Han Saturday Lunchtime Concert