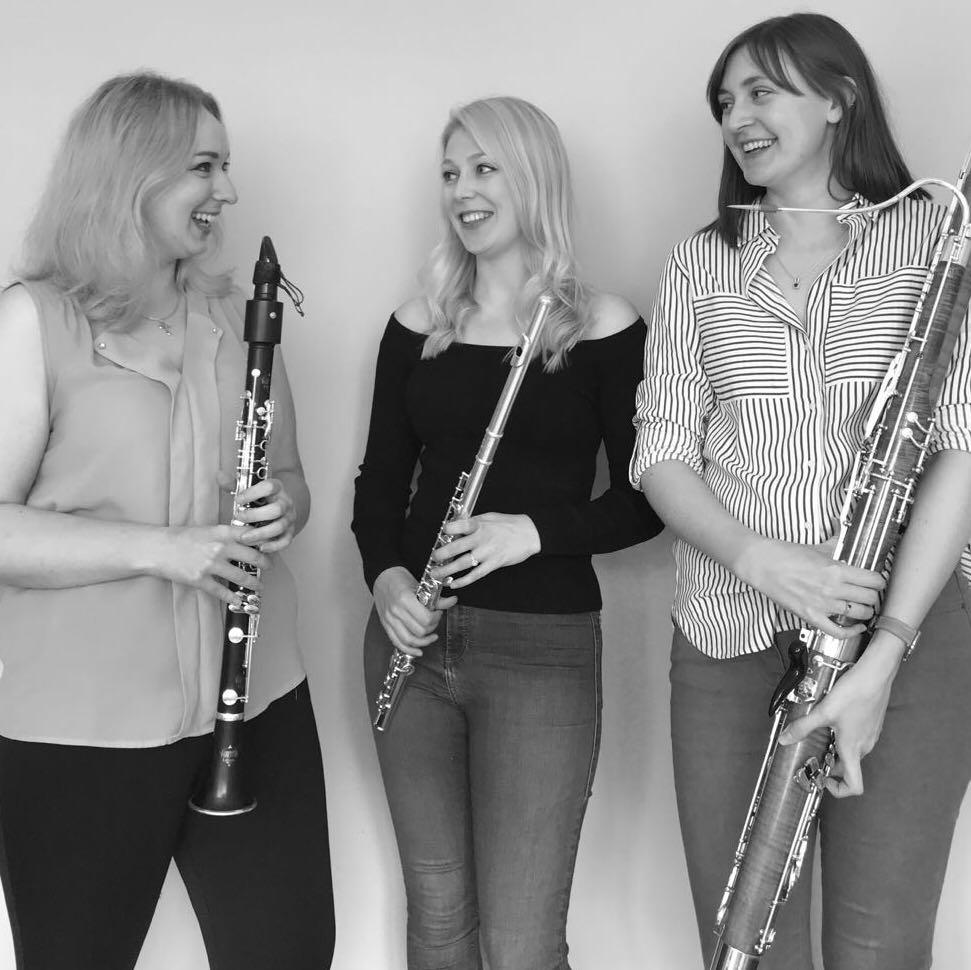 Camira Wind Trio will be playing:

Born in the lake district, Charlotte began her musical life as a clarinettist and pianist. It was only at the age of 16 that she decided she wanted a new challenge and chose to take up the bassoon. After two years of study Charlotte gained a scholarship place at Birmingham Conservatoire, where she completed her BMus (Hons) degree under the tutelage of John Orford (London Sinfonietta), Sarah Burnett (Britten Sinfonia) and Gretha Tuls (then of City of Birmingham Symphony Orchestra). She took first place in the Nicholas Hunka Memorial Prize bassoon competition in 2013.  In 2015 Charlotte gained her Master’s degree in performance with distinction from the Royal Northern College of Music, after studying with Graham Salvage (The Hallé Orchestra) and Gretha Tuls (then of The Hallé Orchestra). During her time at the RNCM she performed in all the college orchestras and ensembles and also met and performed with the other members of Camira Wind Trio. Charlotte now works as a freelance bassoonist in the North West performing in chamber groups, pit orchestras and symphony orchestras. She is also the bassoon tutor for Bolton Music service where she directs the Bolton Bassoon Ensemble.

Emily completed her undergraduate studies at the University of Huddersfield. During her time there she won the concerto competition, was elected President of the University Music Society and was awarded the Lennox Prize at graduation for her contributions to the department. She then went on to complete a Masters Degree at the Royal Northern College of Music funded by a Drapers Company Scholarship where she studied with Richard Davis (then of BBC Philharmonic Orchestra).  Whilst at the RNCM Emily won the audience award at the Ken Griffin Flute Prize and was selected for many of the RNCM orchestras which included the Cantiere Internazionale d’Arte Festival in Italy and also the UK premiere of Penderecki’s ‘Seven Gates of Jerusalem’. Following graduation she is now a freelance flute player based in the North West and enjoys an active performance career with various ensembles and orchestras.

Having recently completed an Advanced Post Graduate Diploma from the Royal Northern College of Music in Solo Performance, Emma is enjoying a varied career as a freelance musician. Prior to her studies at RNCM she was awarded a Distinction for her Master’s degree from Liverpool Hope University. Whilst at University Emma was awarded the Poynton Scholarship, and the EMI Sound Foundation Scholarship.  Emma has performed as a guest soloist with many prestigious ensembles including the King’s Division Army Band, the Royal Northern College of Music Brand New Day Orchestra and gave the UK premiere of Stephen Pratt’s ‘Solo Uno’ in the Conerston Arts Festival in 2017. She is currently the co Musical Director of Sefton Music Wind Ensembles, and has recently been playing in the orchestra for a new production of Jerry Springer: The Opera.