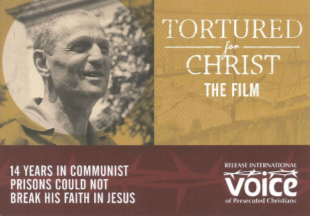 For our film study on Sunday evenings 6:30pm at Holy Trinity during March and April we will be looking at the film ‘Tortured for
Christ’, a cinematic retelling of the story of Pastor Richard Wurmbrand as written in his international best selling book of the same name. The film was produced to honour the 50th anniversary of the book’s release.
Filmed entirely in Romania, including the very prison where Pastor Wurmbrand endured torture and solitary confinement, this powerful film uniquely presents the story as a dramatization rather than through interviews.
8th March—Film showing
15th March—study sessions 1&2
22nd March—study sessions 3&4
19th April—study sessions 5&6