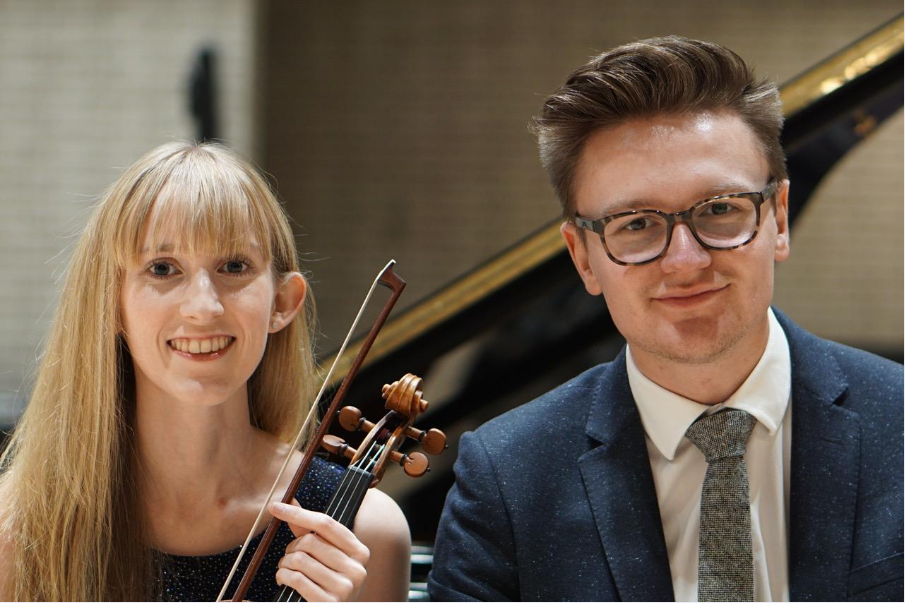 Laura Embrey – Violin Mackenzie Paget – Piano will be performing their WACIDOM Saturday Lunchtime Concert on 7th March. They will be playing:

Ravel – Sonata for Violin and Piano No. 2 in G major

Laura is a postgraduate violinist at the Royal College of Music in London with Prof. Detlef Hahn. She graduated from the Royal Northern College of Music with a 1st Class BMus hons degree, having been taught by Prof. Benedict Holland and Lyn Fletcher. As a soloist, Laura was a finalist in the RNCM Norman George Scholarship competition, 2018 and 2016. In the North London Festival, she was a Prizewinner in the 2018 D’Addario String Competition, and runner-up in her violin recital category, 2019. Awarded a Cambridge University Instrumental Award Scheme Scholarship for chamber music, Laura has been selected for RNCM Spotlight and Monday Recital Series concerts as both a soloist and chamber musician, performing virtuosic works such as Ysaÿe Sonata No.3 and Ravel’s Duo Sonata for violin and cello. She has represented the RCM and RNCM as a recitalist across the country.  Laura has held appointments as leader of the RNCM First Year String Orchestra, RNCM Strings Festival Dove Orchestra and the Hallé Youth Orchestra. At the age of 13, the ABRSM awarded her the Hedy King Robinson prize for music theory and the following year, she achieved a distinction in the AMusTCL Diploma from Trinity College London. Interested in contemporary music, Laura collaborated on a new commission for the Northern Ballet School with RNCM composer, Heléna Walsh. Laura plays an 1876 violin by George Gemunder, and is proud to be supported by Help Musicians UK.

Welsh born pianist Mackenzie has been playing piano since he was 7. Now in his 5th year at the RNCM, and having recently graduating with a BMus (Hons) degree, Mackenzie studies as a masters student with Murray McLachlan. Previously, Mackenzie studied with Nicola Meecham at the RWCMD. Mackenzie is a distinguished solo recitalist. Highlights include many visits to Newport Cathedral for daytime and evening solo recitals, Liszt’s Totentanz concerto with Greater Gwent Youth Orchestra, a performance St Martin in the Fields and winning the 2018 EPTA Piano competition. An experienced solo and choral accompanist, Mackenzie regularly performs and competes nationwide, recently winning the prestigious James Martin English song prize Accompanist Award. Mackenzie has played piano and clarinet in competition winning county orchestras, one of which recently performed in New York’s Carnegie Hall, touring and premiering works with world-renowned Welsh euphonium player, David Childs. Sought after for his pedagogical skills, Mackenzie has helped many students gain some of the highest marks in the region, and gain places at prestigious music schools such as Chethams School of Music. Mackenzie is delighted to receive scholarships for his Masters Degree from Dore Male Voice Choir, The Ann Driver Trust and the William and Frances Dobie Charitable Foundation.